A+ A-
Print Email
The Samsung Galaxy A9 pro is a new release from the Samsung mobile, the smartphone was launched in this January 2019, The Samsung Galaxy S9 phone components are high end, the giant phone company had load a lot of feature on this gadget to make it standout among other phones in the planet with the 24 mp front facing camera and 24 mp + 10 mp + 5 mp camera, would be a very good phone for taking snapshots and also for filming if you are a video producer, it possesses a 6 GB ram of storage, this is cool for high end users, as it would accumulate a lot of app data, and again make the phone work very fast on processing data.

with the help of the CPU which is Qualcomm Snapdragon 710, Octa core would super increase the speed of the phone to run very smoothly, if you do mine Cryptocurrency on your phone then the Samsung Galaxy A9 pro would be a great device to send hash powers while mining some coins. lol, am drifting away to mining cryptos, do not mind me we still on track. The Galaxy S9 pro 2019, has a 128 GB internal storage,  which is very good for users who pile in information on there phone, like those who manage entertainment pages on social media and websites, the 128 GB is a good concept that the Galaxy A9 pro developers added it. It also has a Li-on Non-removable battery. below is the Key specs of the Galaxy A9 pro (2019). 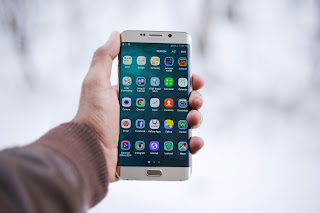 The Samsung Galaxy A9 pro 2019 did not come with the latest android 9.0 update, the company still ships it with the android 8.0 Oreo, the android 9.0 firmware would soon be available for each users soon, the phones body is has a dimensions of 159.4 x 74.9 x 7.4 mm. the phone is not so flat but has the design of the Galaxy S6 edge, the phones weighs 173g, also it screen size is 6.4 inches with a resolution of 1080 x 2340 pixels. one thing i love about samsung phones is the quality of the display it can make a video more clearer than it appears on other phones.

although the Samsung and apple devices are giant brands in mobile production, they do not have giant batteries like the Gionee phones, Oukitel, Tecno and so on. the Samsung Galaxy A9 pro (2019) edition comes with a Li-ion 3400 mAh Non removable battery, but that does not mean the battery cannot last for a long time, it can serve you daily depending on how you use it.

the phone comes with the predecessor of the 9.0. the phone runs on android 8.1 Oreo.

the phone comes with an impressive Octa core, Dual 2.2GHz + Hexa 1.7 GHz kyro 360, Qualcomm Snapdragon 710. this is a very impressive processor to fasten the process of using this device, it would hardly lag unless if the user have installed numerous applications that stores data on the system memory for a very long time.

The Samsung Galaxy A9 pro (2019), which was announced in January 2019, had launched and is available in some countries within Europe. it would be made available to other countries soon.